Hey Rocky, Watch Me Pull A Squirrel Out Of My Attic...Again?!

This here's a story about Billy Joe and Bobbie Sue, two young squirrels with nothin' better to do -- except unleash their squirrelly wrath on me all last week, that is. 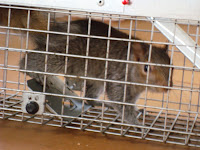 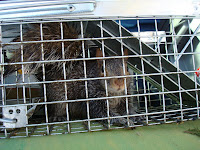 Billy Joe and Bobbie Sue, shortly after their capture.
Yes, these two bushy-tailed reprobates managed to get into my house a little over a week ago, gnawing their way through a small, dry-rotted section of my outside cellar door. I initially became aware of their presence when I first heard Bobbie Sue, the louder, more tempestuous of the two, crawling around and whimpering inside the wet wall that carries the plumbing from the basement to the upper floors.

So I had a squirrel on my hands. But didn't realize I had two until the next day, when I spotted both of them in the attic. 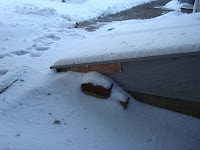 The now blocked entry hole in the cellar door; Billy Joe shortly after his release, apparently making a rude paw gesture at me from his perch up in the tree
Fortunately for me, their access to the house was relatively limited. They had the run of the basement, of course (in which they made a real mess), the innards of the partition wall which they used as a pathway to the attic, the northeast chamber (which is currently empty, and I had kept the door closed all along, anyway, to stop drafts -- good thing for that), and then, of course, the attic. They have a natural instinct to climb to the highest possible elevations, and this must have prompted them to head up there.
Catching them was a royal pain. I swear, they knew what I was up to, and tried to mess with my head. I set a total of three Havahart live traps for them; two in the attic, and one in the basement, just in case either attempted to venture back outside the house via the basement. On one occasion, the bait (peanut butter) was removed from one trap without springing it. On another occasion, a trap was sprung, but with no animal inside. And then, the traps were totally ignored for several days. But eventually, either hunger prevailed, or they just got careless, and I caught both of them in the attic.

Of the two, Billy Joe was the quiet one, staying relatively still, except when I carried his trap, and never uttering a sound. But Bobbie Sue protested her entrapment loudly. I recognized her as being the one who complained from behind the wall a few days earlier, when I was banging it with a flat wrecking bar, trying to drive them away. And she fought the confines of her cage furiously, trying to bust her way out. 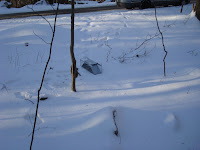 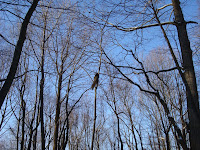 Bobbie Sue, escaping her trap and climbing the sappling
Fearing that they knew the house all too well at this point, and might find some other way back in, I decided to take them to nearby Osborndale State Park to release them to the wild. I released Billy Joe first. He immediately made for the nearest tree, and quickly ascended to the upper-most portion of the canopy. 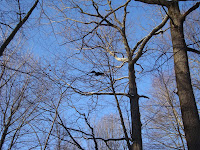 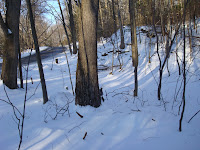 Out on a small limb with no where else to go, Bobbie Sue eventually plummeted to earth, cushioned by the fresh snow (unfortunately, I didn't get a shot of this); she then quickly ascended the same tree taken previously by Billy Joe
But Bobbie Sue's path to freedom was a bit more haphazard, perhaps somewhat in keeping with her tempestuous nature. She darted toward a small sappling right near her trap and quickly climbed it, only to find herself hanging perilously from a very small limb, with no where else to go. She either deliberately let go, or lost her grip, and fell about seven or eight feet down onto the soft snow, totally unscathed, and then ran to the same tree Billy Joe had ascended previously, and began her fast ascent. After a while, she was completely out of sight, lost in the canopy of the tree.
By the way, in case you're wondering, I actually have no idea what sex either squirrel was. My choice of names was simply inspired by that old Steve Miller song, Take the Money and Run, which was playing on my van's radio during the drive over to Osborndale. Before writing this posting, I did some Internet research on Eastern gray squirrels, and found that males and females are generally indistinguishable in terms of relative size and fur coloration.
I also found that gray squirrels mate in January and have a gestation period of about forty-five days. So if either of these two squirrels happened to have been a pregnant female, rest assured that there's sufficient time to find an adequate nest for the new litter. But thank goodness that nest won't be my attic!
Posted by John Poole at 3:02 PM

I bet she deliberately let go. She sounds like a drama queen...like moi.

I can't wait for the novel!

all the best,
Annie Hall

So, Mr. Wizard, just how DOES one "sex" a squirrel? Ask them? Maybe it was Bobby Jim, not Bobbie Sue? Or Billy Jean, not Billy Joe? Inquiring minds want to know!

Dear Tolb (or should I call you "Timmy"?): Like I said, it's no easy task. So I did just what any other blogger worth his salt would do; instead of actually getting my hands dirty, I looked it up on a Wiki page, of course! And there you have it. ;-)
- Sincerely, Mr. Wizard

Let me further qualify my previous comment: What the Wikipedia entry for gray squirrels told me was that identification of sex was not possible based solely on observed body size and coloration.

So, rather than attempt a physical examination of an already p*ssed-off large rodent, I instead made an arbitrary decision based on two characters in an old rock song.

I know I haven't answered your question. But given the circumstances, it seemed like the best possible decision at the time, Timmy. :-)

Loved this story! The names were perfect! Glad you were able to release them unharmed - though it sounded like Bobbie Sue might have wanted to harm herself!!

Thanks, Shelley! You might be right about Bobbie Sue. She may have wanted me to feel guilty about evicting her from her new home! Good thing for all that fresh snow.

As you so deftly point out, squirrels can be, well, squirrelly.

I love to watch them chase in the trees surrounding my home and marvel at how adept they are in navigating the weak branches of the canopy...but making the attic their love palace truly crosses multiple lines.

It is pretty amazing how they can negotiate those thin, higher branches, without any (apparent) fear of heights, etc. And hopefully those two found a new love palace more befitting a ... squirrel couple ... than my attic!

I suppose your "visitors" were a bit like the baby groundhog. I thought the babies were absolutely adorable to watch in the neighbors yard behind their barn. I would sit for long periods of time watching them. BUT, when the bratty little thing got brave enough to venture to my porch, he was still cute and we enjoyed watching from the window. After a day or so, he thought it'd be fun to eat, yes eat, my mum bushes like they were popscicles or something...no leaves, no blooms-just sticks and hang out under the porch to tease the puppy. Then, I was out for blood. I suppose it would be the same with the squirrels. As Mike said, I love watching them frolic in the yard and flit their tails about. And the puppy loves chasing them to their near peril. But, and that's a big but, my mind would quickly change if they found their way to the house inside of the ramshackle of a barn that they currently occupy.

You've got that right, Amy! They are all very cute to observe while they're outdoors, but once they find their way in, they can be a lot of trouble. Just as with your ground hog.

In retrospect, my squirrel story is pretty amusing, but it wasn't so funny for me at the time. I was pretty desperate to catch them and get them out of the house.