The Hawkins house was built by Joseph Hawkins, a prominent lawyer-planter of the early Derby settlement (called Paugassett by the early English settlers), in the Colony of Connecticut. The home site originally consisted of about four acres, and was granted to Joseph Hawkins in June of 1670. At that time, Hawkins also owned an adjacent forty acre farm, as well as another house on Birmingham Point (sometimes also referred to as Hawkins Point) that had been built some years earlier by Thomas Wheeler of Stratford.

No one can readily claim exactly when the Hawkins house was built. In 1670, Joseph Hawkins and Abigail Holbrook had been married about two years, and had had their first child. Since they already owned a home, there was no obvious urgency to build a new one. On the other hand, land grants back then were expected to be utilized relatively quickly, usually within just a few years of the grant; so it is conceivable that construction of the Hawkins house might have begun around 1672 or so. 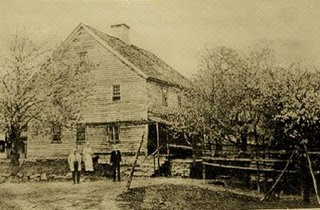 From A Hawkins Genealogy, 1635 - 1939, by R.C. Hawkins et al (Hawkins Association Publishing, 1939). This photo shows the south end and back of the house, when it was situated on its original foundation. The house sat well above grade, with the rear foundation extending outward and probably housing dependencies. There also appears to have been a small orchard in the back. The large center chimney is also visible. None of these particular features exist any longer.

To build a comparatively large, two-story home with a full attic, cellar, and dependencies, far out in the wilderness, was surely no small accomplishment back in those days. That observation, combined with the house's over-built style of construction, suggests that the Hawkins house probably took a long time to finish. So 1675 might very well be a reasonable estimate for its completion. It is, indeed, the year attributed to the house by the Hawkins family genealogy, although I've not been able to find any precise justification for 1675.

It was also in May of 1675 that Derby was legally incorporated as a plantation, due in large part to the efforts of Joseph Hawkins and several others. When Hawkins died in 1682, his will stipulated that the "new house" -- distinguishing it from the former Wheeler home -- be left to his wife Abigail, so it most certainly had been completed by that time. Likewise, Samuel Orcutt, in his history of Derby, claimed that it was "the old Hawkins house ... on Hawkins street" where Joseph Hawkins died.

In my own writings, I tend to date the house as ca. 1670, even though it was most likely built a few years later. Given that the old town records document the homestead as having been established in 1670, I feel that this is the only year that can be ascribed to the house with any degree of certainty. So that's generally what I use. 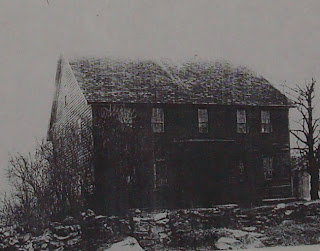 This photograph was given to me by the Derby Historical Society. It reveals the pediment that once covered the front entrance where the current entry porch now stands. The old foundation looked like it was in rather rough shape at the time. I don't know when this photo was taken, but judging by its appearance, I would assume some time around the mid-nineteenth century.

According to contemporary Gaynor-Farrell family descendants, the Hawkins house had once been relocated to another point on Hawkins Street, for some period of time during the 1940's-1950's, possibly within the vicinity of the east abutment of the current-day Hawkins Street bridge. While the exact circumstances of the house's relocation (and subsequent return to its original location) are not completely remembered, it is generally regarded that the construction of Connecticut Route 8 played some role in this. Also, it was clearly during this period that the original chimney column, fireplaces, and foundation were dismantled and effectively discarded. Today, the house sits on a cement block foundation and has a small brick chimney that serves its modern heating systems.

The following photographs show the Hawkins house as it appears today. The first photo shows the front side of the house and the south end, which is the same end shown in the 1939 photo. Note how each first floor window on the south end is at a different height, descending slightly from front to back. This characteristic is plainly visible in the 1939 photograph, as well, and definitively links that photo to the house. I've named these three windows Elizabeth, Minerva, and Caroline, respectively, as viewed from the outside and going from left to right. Or, collectively, The Three Sisters. 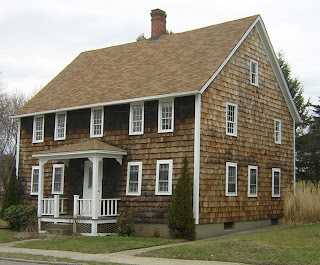 The curiously descending windows on the south end of the Hawkins house are such a distinctive feature that they were even captured in a ca. 1920 bird's-eye-view map of the City of Derby, published by Hughes and Bailey. 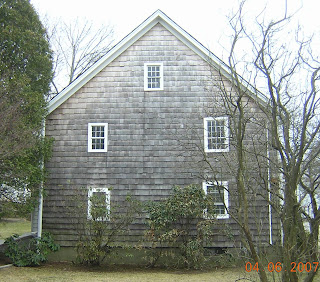 The north end of the house. The small window on the lower left is a relatively modern 1/1 wooden sash window of the downstairs bathroom. In time, I'd like to replace it with an early colonial-style casement window with opaque, diamond lights, all of my own construction. 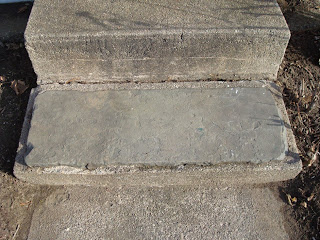 The steps leading up the front entry porch of the house. There is a an old stepping stone embedded in the first concrete step. I like to think it's a vestige of the original front steps. 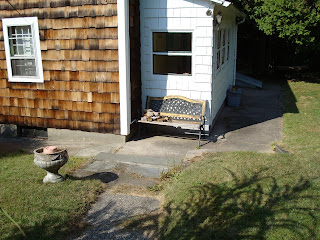 The back of the Hawkins house, with attached mud room. The concrete pavement running along the south end and extending beyond the back appears to conform to the "foot print" of the old raised foundation illustrated in the 1939 photo. Also, the small landing at the end of the path (just to the right of the stone vase) aligns perfectly with the corner of the house on its left side, while its right side is equidistant between the corner of the house and the end of the concrete surface. If you carefully examine the stone stairway leading up the foundation in the 1939 photo, you'll notice that it also occupies precisely this same position. It is my belief that this "landing" is actually the base of the old stone stairway, and that the concrete slabs cap some remaining, lower portion of the original raised foundation. 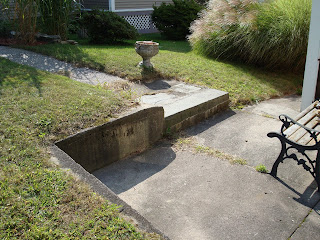 Another view of the landing and pavement. The corner formed by the small retaining wall is situated precisely where the southeast corner of the raised foundation had been. Were I to excavate just below this portion of the concrete, I bet I'd encounter many of the original foundation stones. Such an archeological dig might very well be a project for some future time, after some of the more pressing preservation efforts are completed. 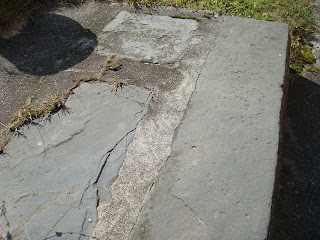 The landing is a curious amalgam of slate fragments, concrete, and at least one visible, whole granite step. One wonders what lies just beneath its roughly finished surface.

This blog is a public journal of the Hawkins house. One objective is to record the extensive preservation and restoration efforts being undertaken here, and to report any interesting or historically-significant discoveries made in the process. Yet another is to generate a thorough and accurate history of the house. Of course, anecdotal accounts of day-to-day life here will invariably surface, as well.

If you've enjoyed this brief overview of the Hawkins house and its history, you might want continue with one or more of the recommended links provided below. Or feel free to peruse the list of categories or posting archives in the left-hand margin.

A Brief Tour of the Attic

I can see ghosties in the window. :)

I'm originally from Derby/Shelton and know where this house is located. I find it interesting that the first floor windows on south side (Elizabeth, Minerva, and Caroline) mirror the way the actual streets are located with Elizabeth having the highest point of the city and Caroline having the lowest. Sounds like the kind of house I'd like to feature in one of my books.

Thanks very much for commenting. I am familiar with the "Honeysuckle Hill" book, though must confess I have yet to read it. I will, though.

The three windows are indeed quite a unique signature of the Hawkins House. I am not quite sure how my brain finally made the connection between the windows and the Derby streets, but some how it finally struck me. Funny how the mind works.

Please do visit again, whenever you have a chance...

Pouring over your photos. Thank you. I just found that this house is where my ancestors lived... Joseph and Abigail. How wonderful to feel I can see what they saw, walked where they did.

MamadeLovesMAC ~ Thanks very much for all the good words. Am glad you've discovered this blog while tracing the history of your Hawkins ancestors. I can readily understand how meaningful the photographs must be to you. And many thanks for becoming a follower! ~John