It seems like the parlor is quickly becoming the candidate room for exploratory, surgical deconstruction. A few days ago, I removed most of the baseboards around the perimeter of the room to get an idea of the age and construction of the surrounding plaster walls. As always, there were some discoveries. 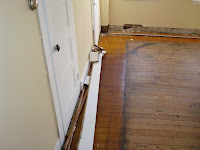 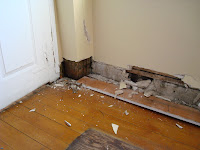 Above left: Some of the baseboards. Above right: A small part of the exterior timber post of the southwest end of bent #2 is exposed. Note the milled lath where some plaster broke away from the wall. There also is some wire mesh that had been used to support the plaster.

When I removed the baseboard surrounding the interior post of bent #1, I found two small blocks of wood that had been used to build up the baseboard around the post. Each block had old wall paper attached to one side, with interesting floral designs. I've never seen these papers anywhere else in the house, and can't help but wonder where the blocks originally came from. Probably, they had been cut from earlier baseboards that had been papered-over. 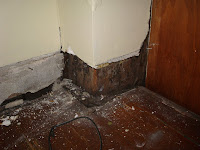 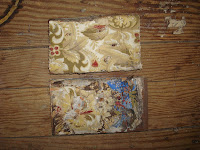 Above left: Interior post of bent #1. Above right: The blocking used to build out the baseboard surrounding the post. The attached floral wall paper was facing the post when the blocks were in place.

I'm not a design expert, but to me, these floral patterns look somewhat Art Nouveau- or Arts and Crafts-ish (or are they even Victorian?). In my eternal quest to figure out the relative ages of things, they suggest to me that this construction (plaster wall + baseboard) is relatively recent. At least, probably no earlier than the early 1900's, or late nineteenth century at most. The plaster itself has a high sand content and contains horse hair, and the lath is uniformly milled and fastened with wire nails. So that would also seem consistent with my estimate.

Just by way of comparison, there is another interesting floral paper decorating a wall inside the entry way closet, under the second floor stair. The paper is badly worn, stained, and broken by splitting plaster, but you can still see what a nice design it had been; it reminds me a bit of old-style theorems: 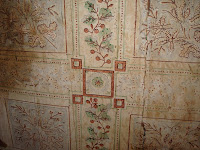 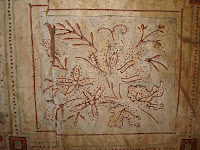 Above: Old floral wallpaper on one of the foyer closet walls.

Perhaps I should develop a collection of stencils based on these designs. I could refer to them as "The Hawkins Collection," or "Patterns discovered in the Hawkins House, Derby, Connecticut," and use them as the basis for fireboards or canvas floorcloths. :-)
Posted by John Poole at 8:56 AM